"A fox knows many things, but a hedgehog knows one important thing"

Every chef and cook should ask themselves: am I a fox or a hedgehog?

After working in Michelin starred restaurants - and winning a personal star when he was only 27 years old - Luciano Monosilio felt he was ready. In September 2018 along with his partners, he gathered some very hard workers and opened the restaurant carrying his name in one of the alleys around Campo de' Fiori.

Luciano was on the road.

A road intended to be walked by kings since Monosilio was already regarded as "King of Carbonara", thanks to the classic Roman pasta dish that he managed to de-re-construct and specify to the max.

Just to make sure:

Pasta carbonara is one of the four classic pasta dishes of Rome and region of Lazio, composed of pasta, pecorino cheese, ground black pepper, Guanciale - cured pork cheek - and a raw egg that goes inside and paints the plate in a tasty-yellow color.

Luciano's carbonara made him a king thanks to a golden ratio - henceforth loaded - of pasta/cheese. The king is not afraid of turning it up a notch and intensifying the mixture with Parmigiano-Reggiano while keeping the egg under low temperature before sliding it into the pasta. The result is hypnotizing at first sight, it makes you high when you first sniff it and grasps your tongue and mind from the first tasting until the plate is totally empty.

Monosilio seems to be a very serious guy - even harsh - but when you meet him in person he's actually a really nice guy. So nice that he agreed to answer some of my questions.

- Luciano: I started to cook carbonara in restaurants like "Roscioli" and afterward in "Pipero al Rex", prestigious stages for this traditional dish.

- M: Do you think your carbonara is perfect?

- L: I don't know if my carbonara is perfect but it's mine and I gave it a new life. I was the first Michelin starred chef in the world with a traditional carbonara on the menu.

- M: Would you like your carbonara to be iconic?

- L: My carbonara is already as iconic as many of my colleagues. I hope that one day I will be recognized as its ultimate interpreter at world level. That would be a great honor for me.

The way to the perfect carbonara goes through a small room with glass walls at the entrance of the restaurant. And in the room there's a machine. And the machine has all kinds of shafts, so any shape of pasta can be made and left to dry in temperature-controlled cabinets until it's ready for use. 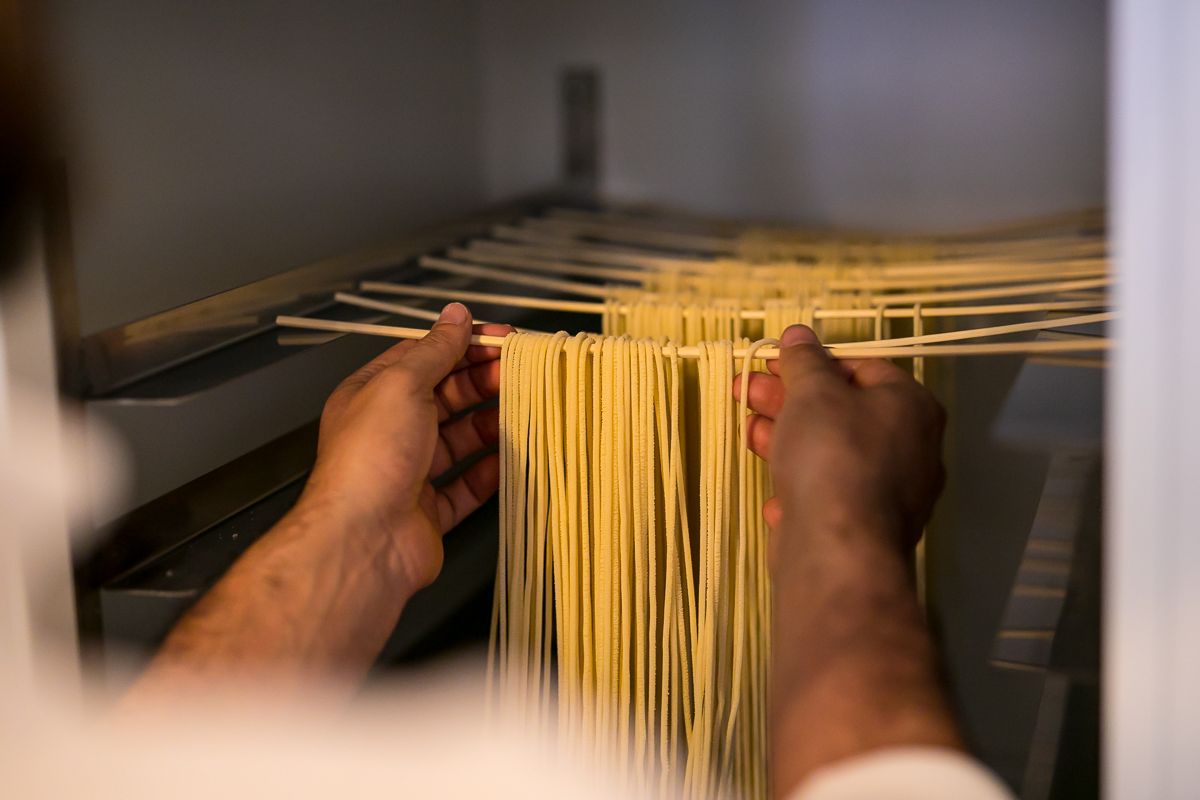 The original trattoria was "nonna's kitchen", and since then appeared many updated and trattorias that are "quicker" in answering the demands of changing trends. Luciano is already a trattoria for Generation Z, or "Trattoria 3.0". Not only thanks to the magic machine, but also because it's a trattoria that walks hand in hand with social media, a refined Instagram account, and the right presence in the right places around the Roman culinary scene.

Rome (as other Italian cities) suffers from being chained in shackles of what tourists think of it, so many restaurants in the city's center fall into the stereotype of mediocre (if you're lucky!) pizza-pasta menu on red'n'white checkered tablecloth (which you pay for), and there could be even an old lady at the entrance that you can never tell if she's actually a part of the staff.

Carbonara is taken very seriously around here. If you just wandered in without knowing the whole story behind, your eyes will go straight to the frame circling the dish on the menu - so you won't be able to skip it. And when it arrives at the table (there's no "if", right?), the set-up will include a golden fork plus the recipe attached to the plate. In Italian, of course.

Let your eyes stroll around the menu back and forth. You'll find classic Roman dishes - with a twist, like uplifting Supplì rice balls thanks to the lemon zest in their coating, extraordinary Panzanella salad, ultramodern Fettuccella with garlic and mullet bottarga, sundried tomatoes and orange juice, and theatrical desserts - the Tiramisù! Oh, the Tiramisù!

If I were Luciano I would be afraid that under the shadow of carbonara, patrons won't turn the menu to its other side to reveal all the other surprises. Yet he is sure of himself and his staff: "It has no importance if the clients come only for the carbonara. Our menu is in continuous change according to the season, and our staff is ready to present all of it."

Recognition comes to Luciano from Rome to all of Italy:

The restaurant was presented as one of the best promising new restaurants in Italy at the 2019 TheFork restaurants awards, combining the votes of the crowd plus the judging panel, composed by the biggest names in Italy,

Front row seat in the book "La Carbonara Perfetta" ("The Perfect Carbonara") of the food journalist Eleonora Cozzella who hand-picked the best 33 carbonara recipes around Italy - not only as a pasta dish,

A chance to widen the span of his project - even before it reached his first birthday, opening his second restaurant on Sanremo's chic boardwalk in last April,

And an international recognition as well - after going last June on his "Great Carbonara Tour" to present his dish on the other side of the world, for example, Eastside Bar & Grill in Sydney and Rossini's in Bangkok.

Perhaps this should be the route of great chefs: finding the thing they are the best at and focusing on it, in order to make the best everything else along the way.

Maybe all chefs should be hedgehogs before they become foxes.

Luciano('s) is a hedgehog you'd love to eat at.